A Floral Spotlight: The Irresistible Queen of the Gardens

A Floral Spotlight: The Irresistible Queen of the Gardens

Oh where to begin! Mom met Nan at a floral design class before The Marmalade Lily was even a twinkle in our eyes! She immediately drew us in with her insane passion for flowers, and we quickly became flower buddies. The next time we crossed paths was at the ASCFG conference, which stands for Association of Specialty Cut Flower Growers. This organization provides a wealth of resources, networking, and marketing opportunities for flower farmers. Nan has provided us with gorgeous dahlias in years past and has now joined our staff as our resident dahlia expert. She has been on the Slow Flowers Podcast, attends a variety of flower shows and conferences around the country, and has studied under the likes of Floret and Francoise Weeks!

As the lingering long hot days of August take their toll on flower farms and gardens, the queen of the cutting garden is just starting her reign. Of all the flowers grown at The Marmalade Lily, the dahlia reigns supreme.

Dahlias grow from tubers—think sweet potatoes, unlike most flowers grown at The Marmalade Lily which are started from seeds. The tubers, stored in a cool dry location during winter, are removed from storage in April to trick them into thinking it’s time to start growing. After the danger of frost, the tubers are planted. Tubers are native to Mexico; they don’t like cold. During June and July, the tubers simply put on green growth. Then in August the magic begins. Blooms! The more blossoms we cut, the more dahlias bloom. Think of deadheading petunias. Although peaking in September, they continue to bloom through the first October killing frost.

The first drawings of dahlias can be traced to Spanish explorers traveling in Mexico in the late 1500s. Fast forward to 1789 when tubers were sent to the Royal Gardens of Madrid. Here the genus was named after the Swedish botanist, Andreas Dahl. Hybridization began in earnest and by 1936, there were 14,000 recognized cultivars. Today more than 50,000 named varieties have been recorded in registers and classification lists. Of course, only hundreds of varieties are available for commercial purchase. Some varieties are only available through local dahlia associations. Many association members hybridize for their personal pleasure. Here at The Marmalade Lily, we grow about 50 varieties.

What makes the ancient dahlia queen so special? Let’s start with color. Dahlias can be found in any color except blue. The purple of a fresh-picked plum. The dark burgundy red of a favorite red wine. The bright sunshine yellow of a rubber duck. The orange of a homegrown carrot. Every imaginable shade of red on Valentine Day cards. Because we specialize in weddings at The Marmalade Lily, the most common colors grown here are white, cream, pink and burgundy. But we don’t shy away from the bride looking for a more colorful palette of bright jewels tones—yellow, orange and red or the majestic purple.

After color, the other dahlia characteristics are size and form. Sizes range from a 1” pompom to the very popular 10” Café au Lait. There is even a size called dinner plate because the flowers literally are the size of a dinner plate! More than 25 classified forms have been named by the American Dahlia Association. At The Marmalade Lily our favorite forms are Formal Decorative and Ball. Other forms include Orchid, Pompom, Water Lily, Collarette, and Anemone. Dahlias come in so many shapes and sizes anyone can find a variety to love.

Nan Matteson joined The Marmalade Lily crew in the spring of 2019. As former cut-flower farmer for five years, her specialty was dahlias. A lifelong gardener she is passionate about healthy soil and seasonal flowers. She is an active member of the Cincinnati Dahlia Association. To learn more about her journey check out the Slow Flowers podcast interview, Episode 387. She can be found on Instagram @queencityflowerfarm. 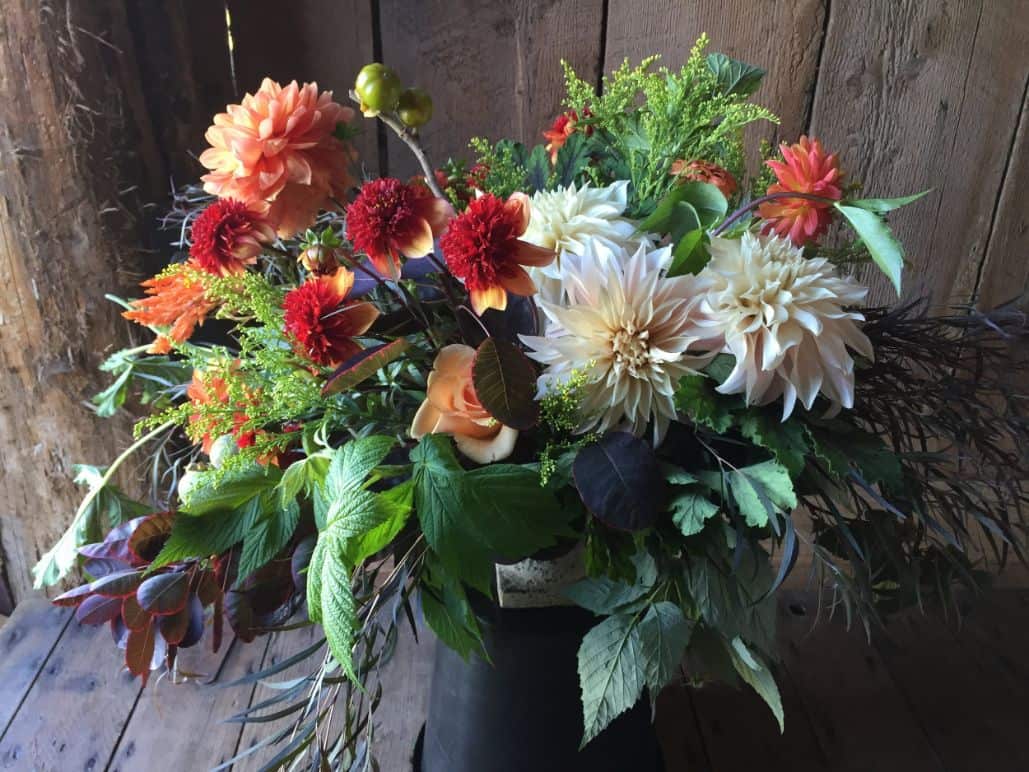 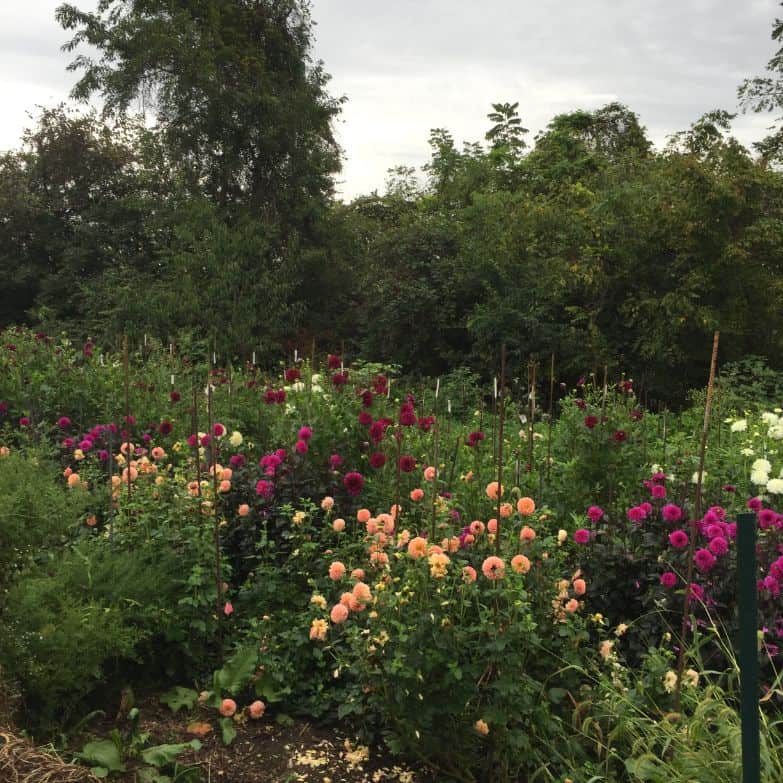 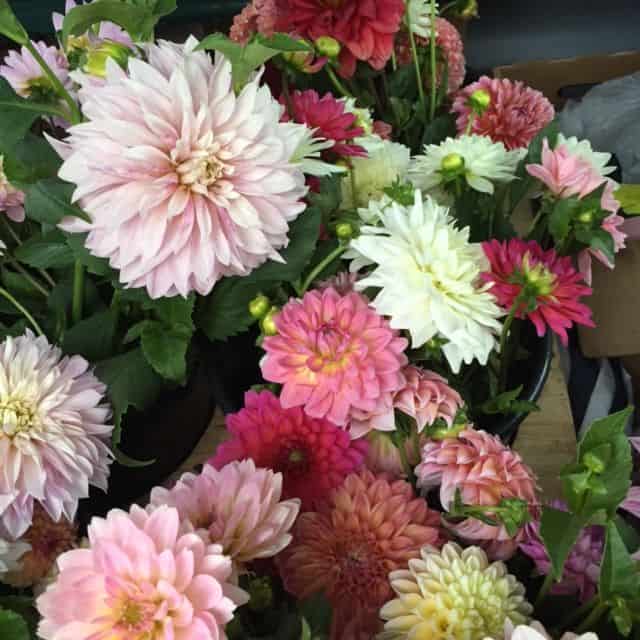 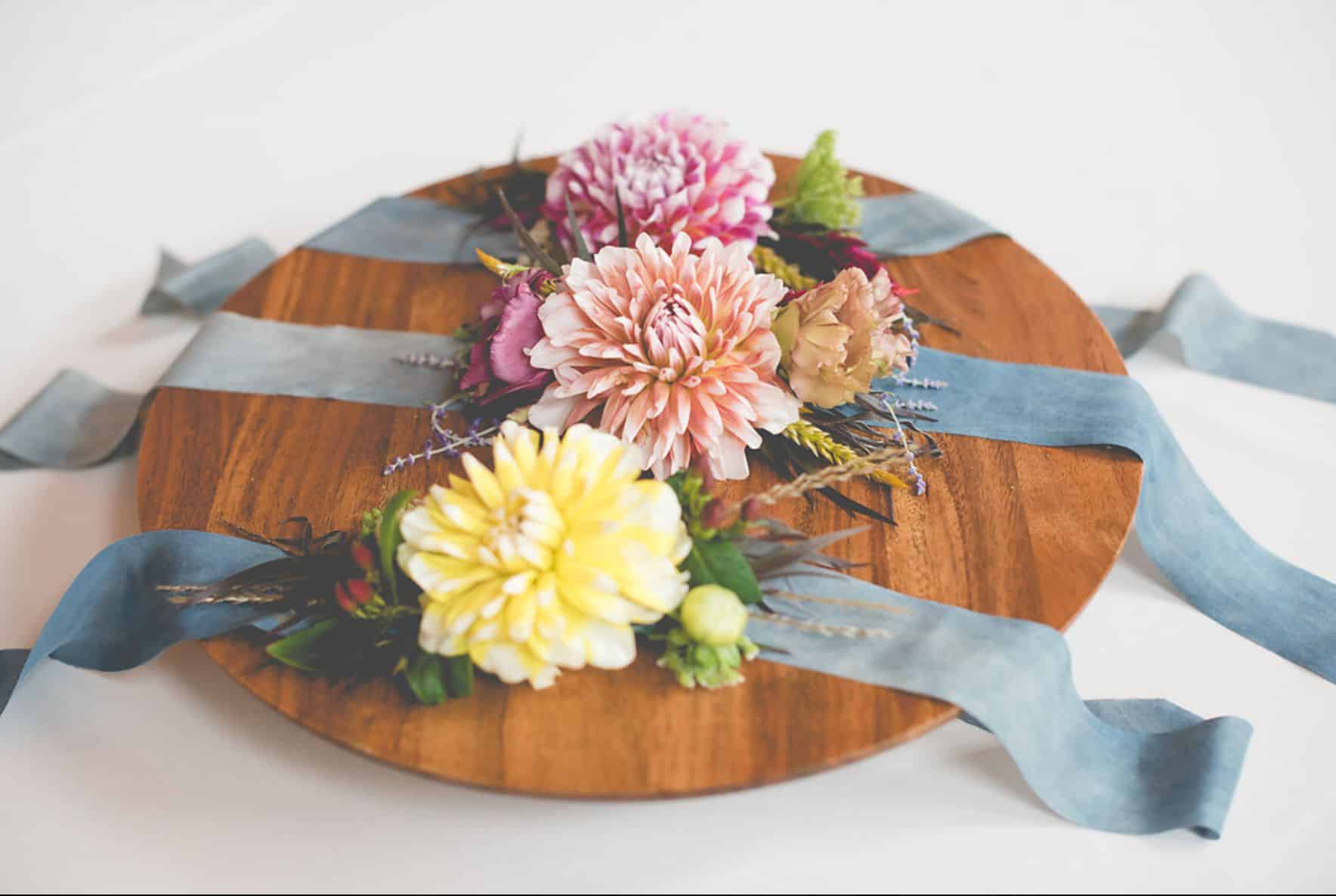 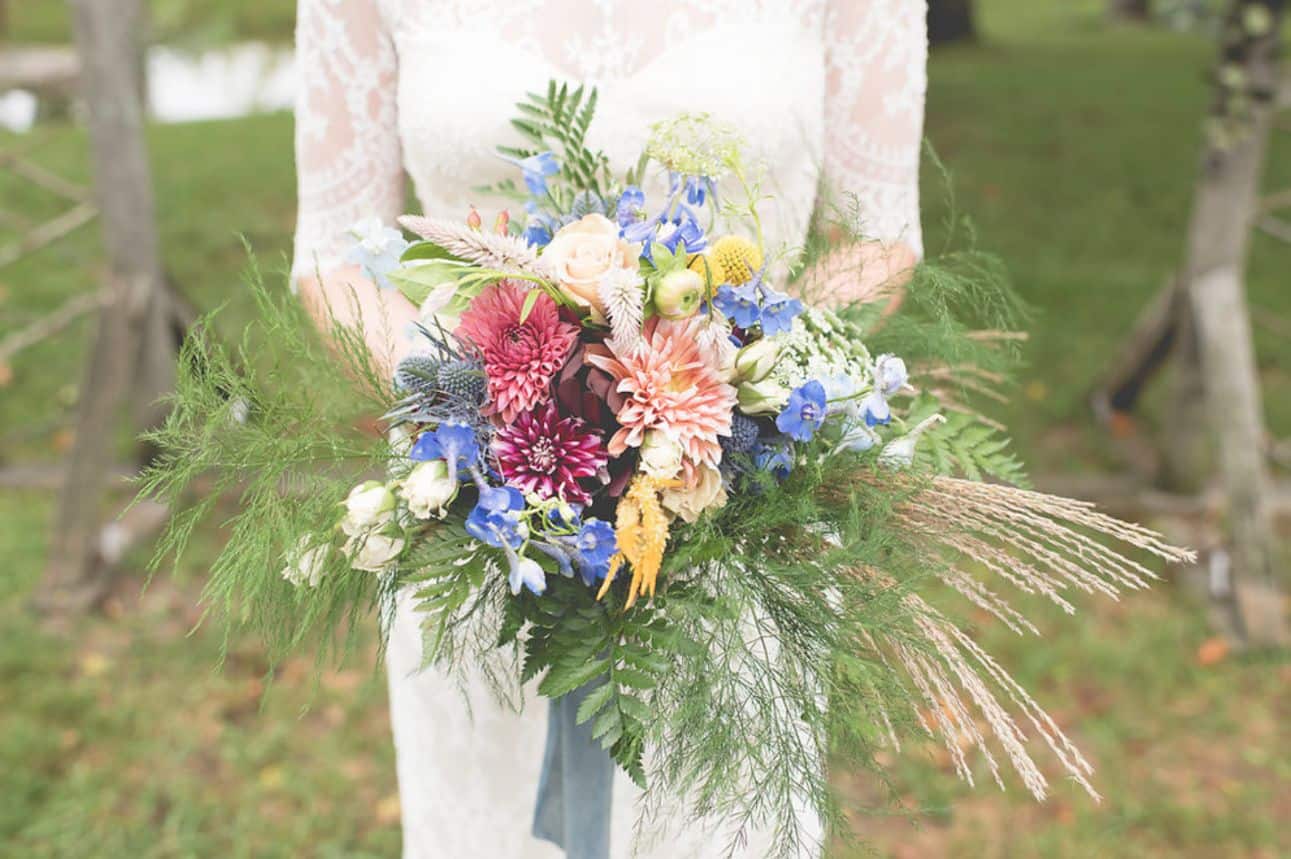 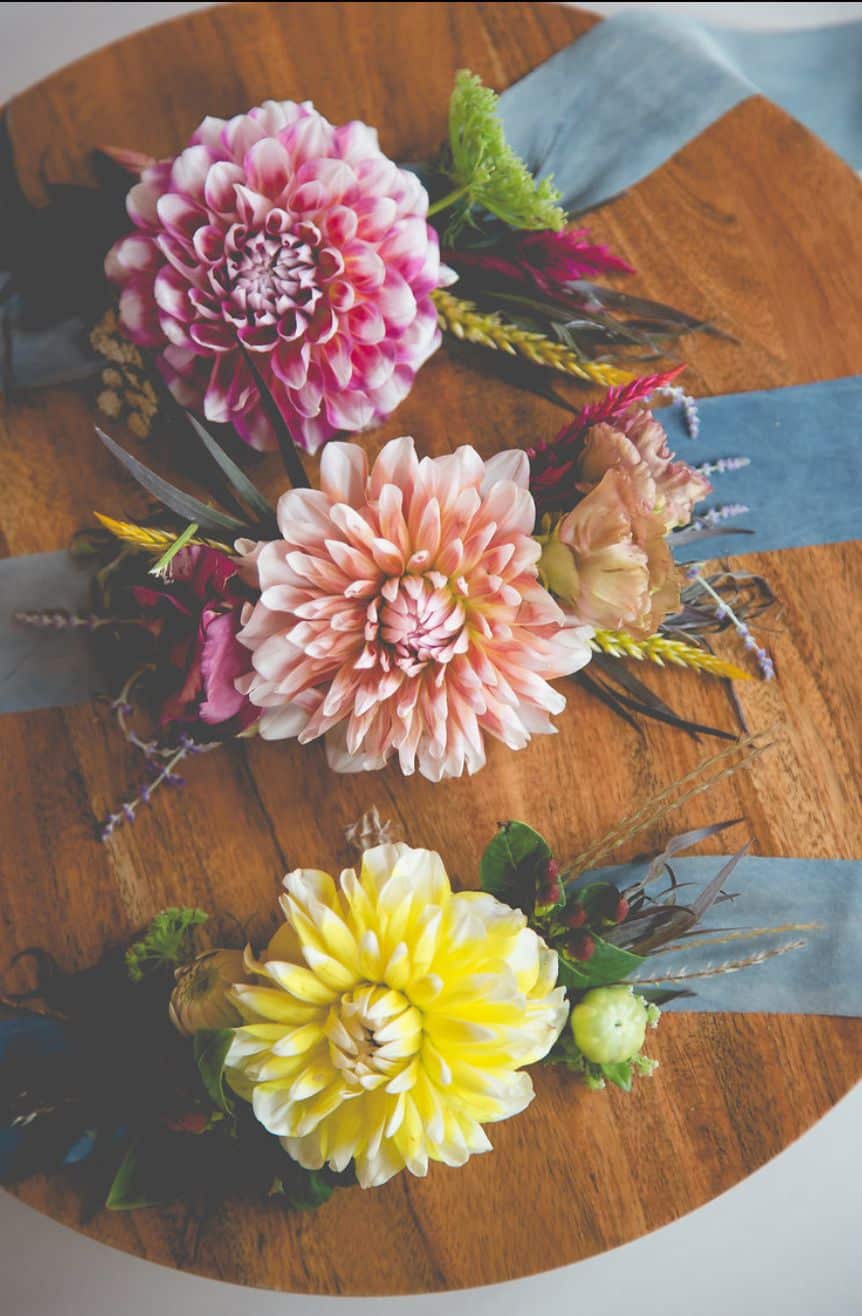 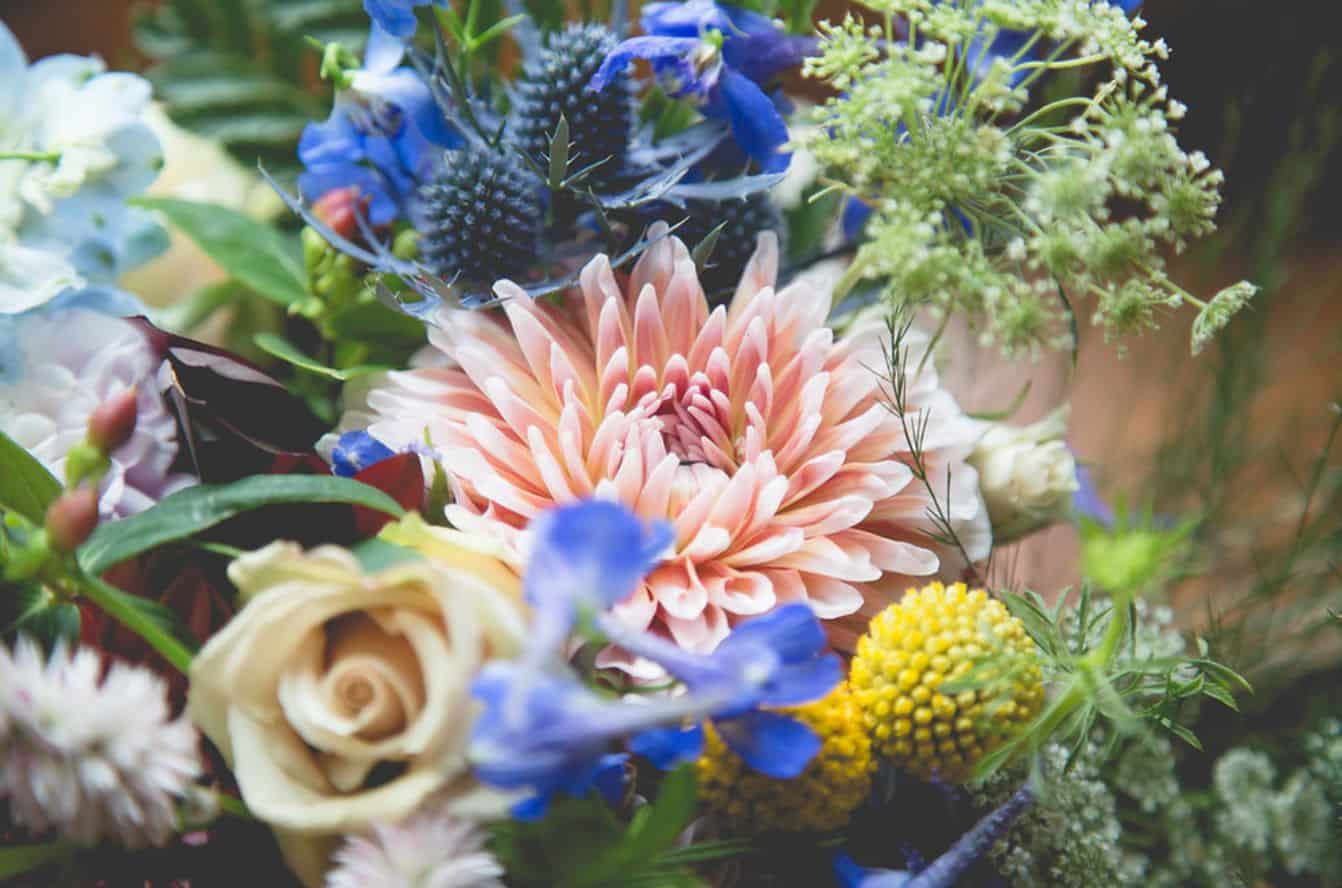 Copyright 2021 Designed with love by Snowmad